At PCI we are putting the finishing touches on our 2010 budget. The Stimulus funds are creating a particular challenge as we look out over the next 12-24 months. On the one hand there should be plenty of new money in the market next year. On the other, despite ARRA an additional 9 states are sliding into California like crises as the housing slump begins to affect tax receipts.

There are two core questions companies need to answer as they think about priorities for the coming year.

1. When will stimulus dollars flow for instructional materials?

By December 11th 2009 less than 40.1% of the stimulus funds have been committed, and much less than that in some specific funds (e.g. Special Ed is only 12.3% spent). Since funds have to be obligated by this coming fall and spent by the fall of 2011 that probably signals a wave of orders in next summer’s buying season.

But wait! It has taken three years. but tax receipts are finally catching up to the housing slump. Since 34% of education funding comes from property taxes (Richard Sims, NEA) this is going to mean that moving forward more ARRA funds are going to supplant state funding. Depending on a particular state’s reliance on property taxes and how hard they have been hit by the Great Recession we will see a wide variety of state level differences.

[click to see a state level report of ARRA spending]

This affect is going to be felt broadly. Texas, which has not been hit particularly hard by the slump, is facing a shortfall and is planning budget cuts. Florida on the other hand is in full blown crisis mode (along with NJ, IL, WI, and several others). You will need to look at where your pockets of strength are to gauge the impact on your particular business.

We expect the spring to be tight – Superintendents will sit on any funds they have until they know their new allocations from the legislatures. Once this issue has been resolved the summer will be extremely busy.

% of Spending by Month 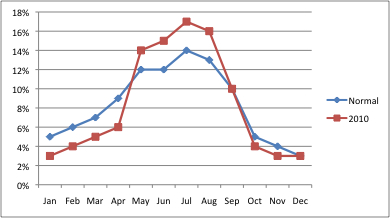 For publishers this kind of curve presents a particular budgeting challenge. The investments you need to make in staffing, inventory, and marketing to maximize your returns during the summer need to be made during the spring when the outcome will be in doubt. It would be easy to bet wrong in either direction – either holding back and letting competitors reap more than their fair share or overspending and being left with your own ugly budget cuts in the waning months of the year.

2. How much of the stimulus will be spent on instructional materials?

If the curve above represents when the funds will flow what about the amplitude? Just how much growth will ARRA mean for Education Publishers? I’ve speculated before that about 4%-5% of the stimulus will be spent on instructional materials. Normally materials are about 1%-2% of education funding but because there are so many restrictions on how ARRA funds can be spent we expect a slightly higher amount to flow to materials. They are a relatively quick and non-controversial investment in most cases.

This would mean an incremental $4-$5 billion in the publishing and materials markets. Since the funding sources that will go for materials have the most money left the big bump is still ahead of us. Title 1 has 78% left, IDEA has 88% left, and Ed Tech has 98% left [link]. By contrast only 1% of the construction money is still available.

This will be spread over 2010 and 2011 but odds are that about 60% of the balance will be spent in 2010. Roughly, that could translate into an incremental $2.6 billion available to publishers this coming year. Wow.

The chart below presents an interesting view of a company doing $10m in revenues pre-stimulus. Note that in both scenarios (flat and up 20%) the revenues will be below a normal year through May. For the first four months to equal a normal year’s revenues annual sales would have to be up 50% over a normal year. 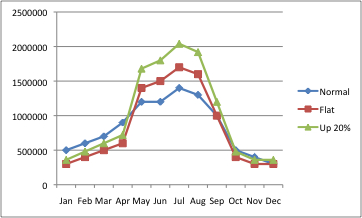 Education Publishers will have to be tracking their sales pipeline very closely to see what the summer is going to look like – otherwise you run the risk of making cuts or holding back on inventory that could hurt in the summer months. If you have not instituted one yet or if yours is lax – time to batten down the hatches there.

This is going to be a very unusual year in a market that is used to a high degree of predictability. Mileage by state will vary widely – so dig deep in your planning scenarios to project the impact in your areas of geographic strength.

Plan for the best, expect the worst, and watch all your leading indicators very closely.