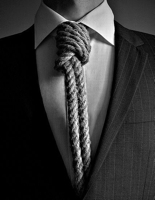 50% of the men did not wear neck ties at this year’s Frankfurt Book Fair. Traditional publishers are struggling with appropriate responses to digital transformation and aping the casual style of Silicon Valley seems to be popular. Interesting fact – if you wear a suit without a tie you still look like a Book Rep.

This sartorial mis-match of rhetoric and reality summed up a lot of what I observed. Publishers are saying all the right things, but they haven’t quite figured out how to do them.

The Education Publishing Pavilion had a CEO Roundtable on Wednesday. Houghton Mifflin Harcourt, McGraw-Hill, and Pearson all had delegates on the panel (50% tieless). Many fine things were said about the market transition in education (globalization, technology, accountability, etc). But where it mattered the most – what the big 3 are going to DO about these trends – it wasn’t particularly illuminating. My crack after the talk was that they are going to differentiate in the same way.

Snark aside there were several interesting take aways from the panel.

The panel did agree that some of the biggest challenges they face are cultural (internal). Moving from print to technology is difficult in the best of circumstances. They do appear to be hiring more executives from outside the industry which will help, but it will take a sustained commitment to new and uncomfortable ways of doing things for it to work. Otherwise the host will reject the transplant. 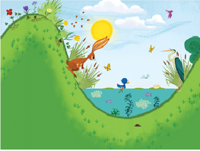 Another aspect of the Book Fair that I love is getting exposed to trends from elsewhere. One topic close to my heart is gaming and Holland had a big presence in the Education Hot Spot focused on edugames.

Mijn Naam ist Haas is a captivating “game” for young children where they co-create the game (draw a line and it becomes the road Haas walks on, draw in the sky and clouds and birds appear, etc). It is a great redefinition of a side-scroller that draws the learner into the world. The Dutch Government supported it with a $640k euro grant.

Another interesting looking game was a project management simulator built around the pyramids. Companies are using it to expose people to best practices. I couldn’t see if salt and beer were the currencies of choice.

Expect to see the Dutch moving many of their games into English in the coming couple of years. For US developers this may also be an interesting market to branch into.

Also – none of the Dutch men wore ties, and some even wore (gasp) jeans.

Holy Cow It Is A Big Show

You shouldn’t rely on any one report back from this event – it is simply too huge for anyone to really wrap their arms around it. It saw a few things and drew some conclusions but my perspective isn’t definitive.

Globalization is real and moving in both directions across a wide variety of education niches.

I made good contacts in Europe, the Middle East, Southeast Asia, and Oceania. Most of the other vendors I spoke with in the Education Hot Spot or in the American Collective had similar results.

I have gotten a great deal out of attending this conference the last two years. When I was consulting my practice went global – mostly foreign publishers entering the US market seeking expertise. Now that I’m on the other side I’m pushing global as offense and defense against the unknown.

If you are still focused on just your own country you are limiting your growth at a time when we are all challenged to find new markets. You are also setting up the risk that an outside entrant will steal your share. You must be present to win so show up next year!