An understatement – education publishing is changing.

Heck, publishing writ large (trade books, music, movies, news, etc.) is shifting in dramatic and unpredictable ways. Textbooks are one of the last little corners of the intellectual property world to enter this new era.

Today’s post is a teaser for a longer piece I’m going to publish in the next few days. Mark Sumner’s “The Evolution of Everything” got me thinking about our industry in biological terms as we enter this era of rapid change.

I believe that two forces, one blindingly obvious and one subtle, are causing an huge shift in the source of value and differentiation in the instructional materials market.

First – the analog to digital transition is upon us and will shuffle the deck the same way it has in music, television, and the news business.

Second – we are also seeing a quieter revolution in buying behavior as a deluge of information swamps inboxes. In the attention economy time is more important than money. The value of expertise is increasing at the same rate as the flow of information.

These forces indicate that the primary value drivers of our industry, which has witnessed several waves of consolidation, are going to reverse direction – more value creation will be found in smaller entities in the coming years. I address the first issue today.

Why were some dinosaurs so big?

“Big animals pack around a big gut, and big guts on average are more efficient at extracting nutrition from food. As sauropods expanded their diet to include less and less nutritious sources, they needed to pack around bigger and bigger stomachs—a kind of arms race of limited calories and vitamins as these creatures attempted to nab every source of food possible.” Mark Sumner – The Evolution of Everything 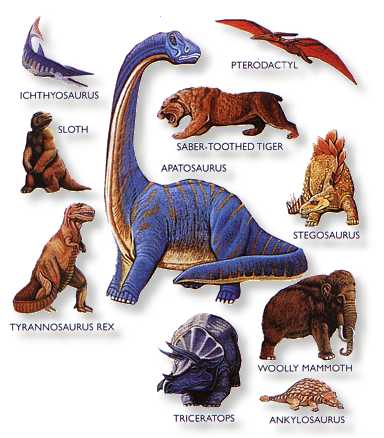 For the past several decades the big education publishers have been building their businesses on a base of scale efficiencies. Ever bigger warehouses, vast conglomerations of imprints, printing in Asia, and political influence that only employing tens of thousands can earn. At Harcourt Achieve we had over 27,000 SKU’s – and that was before it was merged with Great Source.

“The end of the Cretaceous was a nasty time. Lots, and lots, and lots of things died off that weren’t dinosaurs. Overall, about half of all genera and three-quarters of all species failed to make it from one side to the other, from one period to the next.

There was no single characteristic that seems to have been a good predictor of surviving past that ugly line of iridium enhanced clay in the geologic record, but there was certainly one that was a good indicator of not making it: large size. Many small animals died at that time, but every land animal bigger than a standard poodle was a goner.” Mark Sumner – The Evolution of Everything

The reason is straightforward – any large organism lives at the center of a complicated web of dependencies that build up slowly over a long time. Fatal disruption of an interdependent network like this can come from any node. Smaller organisms can be more nimble at finding niches in what remains – and will grow into tomorrow’s giants.

If the biological metaphor holds the changes we will experience in publishing over the next several years will play to the advantage of small to mid-sized companies at the expense of the major publishers.

I don’t believe this will be an era of extinction – just that the conditions of rapid and disruptive change will create more opportunities for smaller more nimble companies. The big guys will survive – but like TV or music their share of the business will shrink.

In my next post I will explore the impact of the attention economy, why this is happening, and some ruminations on how it will play out.

Getting the Units Right