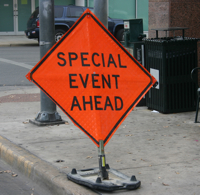 OK – admit it, trade shows are fun. Sometimes traveling to a distant city, circulating with your peers, and dining out on the company can be a kick. You are learning too – about competitors and about your customers. The deadlines around a trade show can produce drama and tension, and some people thrive on that.

By comparison web marketing can be a daily slog and there isn’t much direct contact with the customer. Web marketing requires persistence and patience. Success is metered in small steps and delivered incremental improvements over time.

In this article I explore who should prioritize shows and who should focus on web marketing and I share some ideas about how to compare the two.

I focus on these two activities because in most cases the best source of funds to drive growth in web presence is a bloated show budget. The palette of marketers is much broader – and the metrics used here can be used to compare the full range of options.

What’s a marketeer to do?

Big companies are answering this question in different ways. Apple is shunning trade shows in education pretty much altogether (zero presence at FETC last week). Promethean had a campus sized booth, cheerleaders, and free gourmet cupcakes for all.

Who is right? As always the most important question to ask about marketing spending is “compared to what?”
In order to influence customers you need to be present in different media and locations (print, web, trade shows, catalogs, peer to peer, PR etc.). Customers lend credibility to companies they see popping up in different places.

A marketing budget is a series of compromises that should maximize visibility and revenue. One of the challenges in marketing is justifying visibility when there isn’t a direct tie to revenue (i.e. when your CRM can’t make a direct link). Depending on your circumstances both trade shows and the web can fall into this category.

I believe the relative value of trade shows has declined precipitously in recent years when compared to web marketing. That doesn’t mean you should abandon shows, you just need to think very carefully about using them in the right way. At the end of the day what really matters is profitable revenue.

Lets dive into a pool of numbers to look deeper at this question.

Lets make some rough comparisons to get a sense of the relative worth of the two channels.

Consider a trade show with 5,000 attendees.

With a gross margin target of 70% you need to make $1,000 per sale, or $500,000 to make these events revenue neutral. You should be promoting expensive products or reaching decision makers who buy in large lots to make these economics work. If your average order size is less than $1,000 you are losing money on the trade shows (using the lead/order flow assumptions above).

Scale this up or down – the basic economics remain the same. Go cheap and end up in the back corner in a 10×10 and your leads will drop and be lower quality. Glitz it up with rock star lighting and your cost per lead skyrockets along with the required revenue.

There are also non-revenue benefits to being at a trade show and these shouldn’t be dismissed out of hand. You build brand awareness, network with other providers in the market, and provide support to current customers.

The most compelling benefit is that full fledged sales conversations can take place at the event itself. If decision makers (larger budgets, more influence) are present at a show then a low number of leads may not be as much of a concern, in fact the show may be an extremely efficient of way of meeting with large number of these folks in a short time.

In education this would argue for attending AASA but not IRA. The attendees do need to be walking the floor not playing golf, so your mileage will vary.

Another valid reason to attend a trade show is influence with the sponsoring organization. If the membership are important customers of yours it is good form to show up and support their professional association.

Brand impressions are less – well – impressive. Assume that 30% of the show attendees are paying enough attention when they walk by your booth that they get an impression. You will reach 15,000 people over the course of a year at a cost of $23 per. Yawn. At the end of the day (or fiscal year) top and bottom line results are all that count – impressions won’t buy a cup of coffee.

One other thing – trade shows are moon shots. It is almost impossible to learn and modify on the fly – the event passes so quickly that if your show promotion or materials fall flat you have no chance to recover – until next year. 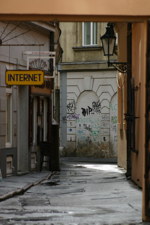 Now lets look at a comparable example for web site.

The brand impression argument is much more compelling for the website – the cost per impression is a fraction of a tradeshow’s ($1 vs $23) and the volume is higher.

Even better – the quality of the raw leads you get on the web are often the highest short of personal contacts from your sales force. I carefully chose the phrase “raw leads” because the downside of web leads vs. show leads is that they are unqualified – no one has talked to them yet to get a sense of how truly interested they are.

But – these customers are actively seeking you out when they search on the web and then put their hand up for attention. At a trade show most of the people who stop are just chatting – they were walking down the aisle and needed a break. This is one of the fundamental differences in on-line lead generation and all other forms (here is an extended post on this subject).

While websites generate leads at a slower pace, over time they greatly surpass tradeshows in high quality leads because the volume is so much higher. It isn’t even a tortoise and hare story since the leads from a 3 day trade show are equaled on the web in 10 days (100/day vs. 31/day).

So lets break it down. The following chart maps out the examples I gave above. 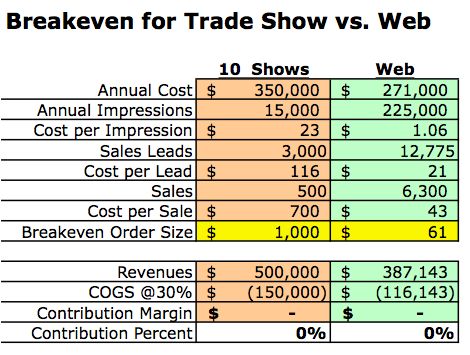 From a marketing investment standpoint these are equal – the return to the company after the cost of goods and cost of sales is zero. But this isn’t realistic for a specific company – it merely shows the price points at which each option starts making a net contribution to the larger business. Between $61 and $1,000 the web is going to be a much better deal for you.

The key is to make this specific to your company. You do that by applying your average order sizes and gross margins for shows and the web and your specific metrics (costs, response rates etc).

Here is an example from an average of a few supplemental companies that I have familiarity with. Their trade show related sales are typically double what they earn on the web largely because a Rep is actively working them. BUT – even with the benefit of this difference they are losing money on trade shows and are wildly profitable on the web. 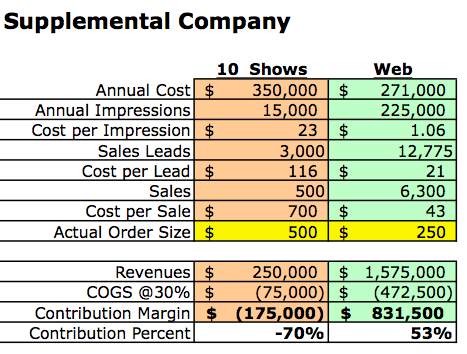 To get to parity on the contribution margin if we hold the web order size at $250 the comparable trade show revenues need to be $4,000 per sale.

But what about gross margins – won’t they affect this result? Somewhat – but order size has a bigger impact on this decision. If your gross margins are 90% you have a breakeven of $778 on trade shows and $48 on the web. If they are 40% breakeven is $1750 for shows and $108 for the web. The essential story doesn’t change.

This example makes clear why Apple is shunning shows and Promethean is investing heavily. Apple sells tons of individual computers at something less than $4k with moderate gross margins while Promethean is mostly doing building or district level deals that bring in orders in six and seven figures with higher gross margins. The gearing all works in Promethean’s favor for shows and in Apple’s favor for the web.

The conclusion is pretty clear – if your average order size is modest you probably should not be prioritizing trade shows (or you should be focused on dramatically increasing your average order size). Most companies should go to a handful of shows for the non-economic benefits – but choose carefully and scale your presence appropriately.

Don’t be seduced by the work and “prestige” involved in trade shows – its easy to think that because you are busy and talking to customers that you are doing the most productive thing. Dig deeper – challenge your comfort zone on this.

Do you think about your web presence as a 24/7/365 trade show booth or is it something you feel like you have to do? Is it getting the same level of sustained attention that major events get?