The economy has already had a huge impact on education budgets. But if you think it is bad now wait until the ARRA stimulus goes away. This chart tells the whole story. 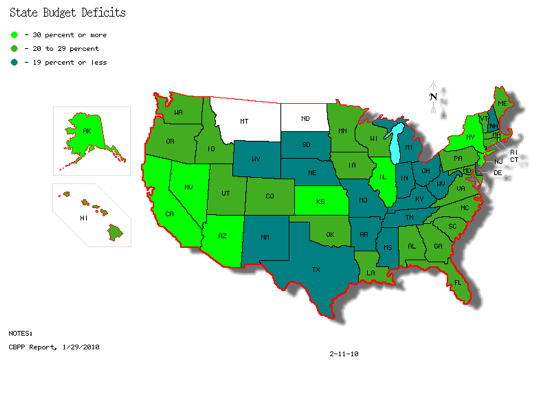 Nine States have deficits of over 30%, and this groups includes powerhouses like California, New York, Illinois, and New Jersey. Only Montana and North Dakota are not in deficit.

This is being driving by two factors. First, the sharp decline in property values is finally catching up to tax receipts. There is a three year lag in this mechanic. IF housing prices bottom out this coming summer as predicted that means we have three years from then before real estate taxes stop falling. 2013.

The second factor is the sour economic situation and the unemployment that goes along with it. The impact here is already moderating as these numbers turn. Unemployment has a relatively immediate impact on state incomes – as payroll taxes fall so do sales taxes while unemployment benefits soar. But it also bounces back faster when things improve.

This crisis is going to have a long term impact on education and the companies that serve this market. The Stimulus dollars have moderated the situation this year (and next). But, after 2011 the Feds are not coming to the rescue.

Investing in education is a high priority for the administration and makes sense in a downturn – but don’t let that stop congress from sitting on their hands. Anyone who looks at DC right now and thinks there is political will to spend more is fooling themselves.

In comments please discuss how you think districts will react to this new reality.

I’ve written other posts on the choices districts face in this situation. See:
Government Spending on Children

Holy Crap What is a Major Crisis?

Life on the Tip of the ARRA Spear

Will ARRA Funds be used for Change or Propping up the Status Quo?

And much more on the Economy and Education Tab