Textbooks and Education Technology are changing in disruptive and dramatic ways. Technology substitution is driving a great deal of this change. The recent sale of Harcourt’s various divisions to Pearson and Houghton/Riverdeep is only the tip of the iceberg. Education Publishers of print and technology products, large and small, are all wrestling with these changes.

The changes are affecting every aspect of our business including how products are created, priced, sold, packaged, promoted, and even what the basic definition of a product is. I believe these changes are only beginning and that they will accelerate in the next several years. Anecdotal evidence includes attendance at shows like the recent IRA (empty) and NECC (swamped). Sales of electronic whiteboards (Promethean, Smart, RM) are skyrocketing. Pearson swept the California Social Studies adoption with a hybrid technology and print product.

We ain’t seen nothin’ yet.

There is a more quantitative way to study this change. Over the next few days we will be publishing a study done by Paul Schumann a futurist and business analyst who has studied the sources and rate of change across many industries at IBM and as an independent consultant at Glocal Vantage. He has taken a detailed look at the Education Market and his findings have profound implications for where our industry is headed. Paul has published another version of this study on his blog Innovation Travelogue.

Paul’s analysis is a quantitative tour through what we can expect in the coming years. The punch line is that we are at the beginning of the product substitution shown in the chart below. Don’t discount the dramatic nature of this prediction. When disruptive technologies hit an industry the change often sneaks up on the unprepared and is largely over before there is time to react. Consider the tale of print encyclopedia’s which saw the value of their products plummet from over $2,000 to under $5 in a 3 year period in the 1990’s when CD-ROM based products were bundled with other software. 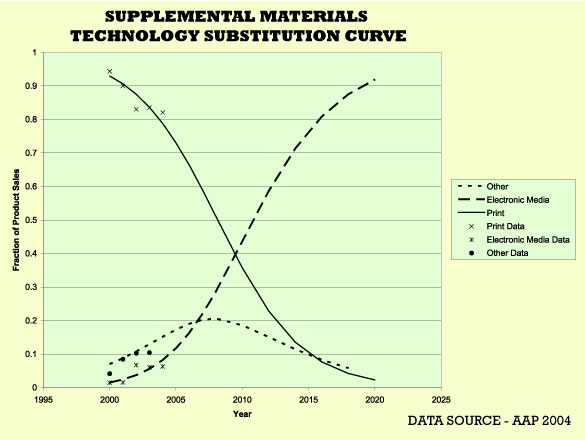 Here is a small sample from the report:

“One of the interesting, and most insidious aspects of this type of substitution, when the substitution is taking place in a growing market, is that a large percentage of the substitution has taken place before the old technology sees two successive years of decreased revenue. This is the case [in Reference Libraries]. Fifty percent of the total time to 90% substitution has elapsed before the print media have experienced two years decline”

Other Articles in this Series

Below the fold a bio of Paul Schumman

Paul Schumann is a futurist and an innovation consultant. He is the founder and current president of the Central Texas Chapter of the World Future Society. He is the president of Glocal Vantage Inc. and The Innovation Road Map. He is a member of the advisory boards of the Marketing Research Association and ACC’s Center for Community-based and Nonprofit Organizations. He is also active in Texas Forums.

Paul is leading an international volunteer effort to understand the principles of a successful innovation commons through the Innovation Commons Network. He has coauthored two books and has written numerous articles and book chapters. He writes extensively on the web on three blogs –
Innovation Travelogue

Prior to forming Glocal Vantage, Inc., he had a 30 year career with IBM as a technologist and technology manager in semiconductors, an internal entrepreneur creating the first independent business unit in IBM, and a cultural change agent. He has BS and MA degrees in physics from the University of Texas. His current interests are in understanding the power of media to shape how we perceive and think about the world, and in extreme democracy, and other applications, that utilize the power of social technologies to facilitate change.