E.D. Kain over at Balloon-Juice has a fascinating saunter through crime stats since video games became widely popular.

According to the FBI, since 1990 violent crime has been on a steady decline. E.D.’s basic hypothesis is that some of this can be attributed to people experimenting with rage and mayhem in video games and learning how to manage their emotions more effectively as a result.

Those of us advocating for video games in the classroom have been making a related argument. By allowing kids to experiment with activities that are too dangerous, too expensive, or too time consuming we can broaden their experience and expose them to epistemic frames they would not normally have access to. In the case of violence – it is far safer for everyone to experiment with it virtually. 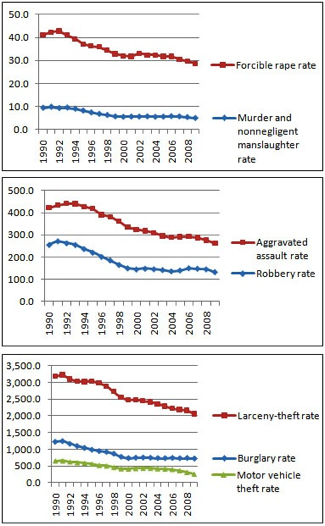 At the end of the day attributing this decline to any one thing is unrealistic – but it is significant that the statistics flatly contradict the popular meme that violent video games are desensitizing young people and causing a rise in crime.

It just aint true. The next time you hear some cultural scold go off on this topic change the channel.

Go read the article – it is short and makes a good case.