These are grim days for the world of education. Funding cuts past, present, and future loom over schools and districts. Class sizes are swelling, essential services are being trimmed, and any spending decision that can be delayed is sitting in limbo.

The companies that serve schools are feeling the pinch even deeper – while school budgets are down roughly 10%-15% scuttlebutt around the industry has most education companies down 20%-40% from 2011. Data systems, some technology niches, and companies with strong international presence are doing better, but those are the exceptions not the rule.

Relatively speaking schools have bad colds, we have pneumonia.

I’m here today to spread a little optimism amidst the gloom.

It may be tough to remember in the midst of the fray that what we are facing is a market crash, not individual company failure. Those who can hold on through this period will see better days ahead.

Why do I believe this? Two reasons.

2. More importantly the population we serve is growing not shrinking. The chart below shows public K12 enrollment through 2019. 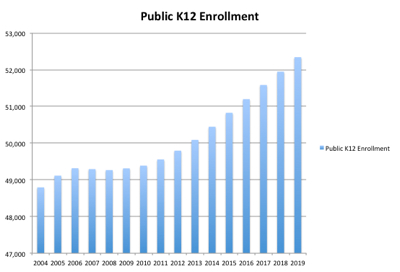 Note that we are just entering a period of sustained growth in enrollments after several years of plateau. Schools will see about 5% growth in the population served over the next 6-7 years.

While funding may be a challenge – the NEED to education children will always be there regardless of what is happening in the economy. For the foreseeable future it will also be growing, not declining.

As the economy recovers (with education funding lagging along behind it) there will be plenty of opportunity ahead.

There are other existential challenges we face – new technologies, different funding patterns, evolving demographics. But we do not face a market in decline, only a market in temporary crisis.

As my friend Randy Wilhelm would say – “go out and do something good for kids.”