The Obama and McCain campaigns squared off at the Great American Education Forum sponsored by the Association of Education Publishers (AEP)* in Washington DC today. Educational policy experts from the campaigns addressed a wide range of positions the candidates are staking out from vouchers to the federal role in education.

Jeanne Century, Director of Science Education, University of Chicago represented the Obama campaign and Lisa Keegan, former Arizona Superintendent of Public Instruction represented Senator McCain. A panel of publishing industry experts** posed questions followed by a press conference. This is the first head to head discussion of education priorities between the two campaigns. 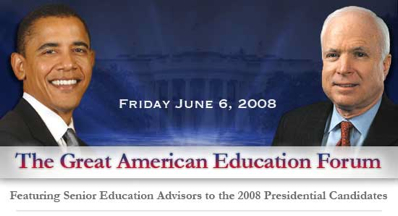 Given that Education is consistently rated as one of the top 2-3 issues (Pew May 29th) it is surprising that it hasn’t been more visible in the campaign trail so far. The forum was valuable because differences in approach, philosophy, and policy emerged during the discussion.

On most of the issues the differences between the candidates positions are more matters of emphasis. Generally speaking the McCain position is that we already know what works, we just need to let the states sort that out and help them do more of it. Obama wants to take a more pro-active and comprehensive approach to addressing not just K12 but lifelong learning. Both camps support helping teachers be more professional and helping them follow best practices that help kids prepare for the 21st Century.

Follow below the fold for a detailed look at the positions of the campaigns. RSS readers click through for the full article.

From a practical standpoint the Obama campaign appeared to be playing more offense in articulating a detailed education strategy which was released last November. The McCain campaign is still a couple of weeks away from releasing something and indications are that even then it will be more of a philosophical document than a policy blueprint.

To some extent this reflects the latitude afforded within each party to discuss education more than anything else. Democratic positions are fairly clear and well established and there is broad support for public education. The Republican party has a broader range of constituencies to satisfy from the far right pushing for vouchers for private religious schools to centrists who support public education. This makes it easier for Obama to be specific while McCain will have to stay at a slightly higher level of abstraction when discussing education issues.

Ironically in the presentation of ideas from the specific representatives we saw almost exactly the opposite. Ms. Keegan was very detailed and wonkish in many of her answers demonstrating a deep knowledge of the underlying processes and regulations that govern education today. Ms. Century was more aspirational in how she presented the issues, tending to speak more building for the future rather than digging into arcane specifics. For this audience, with detailed knowledge of the issues and market mechanics, the former approach resonated broadly (despite the fact that it is probably a more pro-Obama group in general).

The McCain approach is about allowing the states to articulate what is working and to provide support for those programs. Rather than put a big stake in the ground for a specific program they will be more reactive. That said, there were references to phonics, direction instruction, and other dog whistle programs favored by the right that were encouraged under NCLB. The McCain camp also sees Union contracts as a major barrier to innovation and returned to this repeatedly (and more pointedly) during the small press conference that followed the main event.

Obama’s campaign takes a comprehensive approach to lifelong learning, they are not just focusing on one or two signature issues for K12. He is clear in his support of public education but would like to see a shift away from the narrow focus on reading and math mandated by NCLB to 21st Century Skills like problem solving, collaboration, communication, creativity, and leadership. At the heart of his education policy is support for teachers and making it a respected profession supported with the right resources. They want to reach kids as early as we can. Evidence shows that a dollar spent in in Pre-school can save seven to ten dollars in social services when that child grows up.

The Federal Role in Education

McCain – A strong theme throughout Keegan’s comments was that the states need to drive change – the Federal role is helping surface what is working and encouraging others to try it.

Obama – The Federal Government has a role in pushing the conversation to supporting lifelong learning starting with programs like universal voluntary pre-school through to college outreach and workforce development.

Is NCLB an Unfunded Mandate?

McCain – Basically this question is inside baseball – what we need to focus on is getting more for the money we are spending rather than putting more money in.

Obama – We need to put more money into teacher preparedness in particular, this will have the biggest impact on outcomes. We also must broaden the reach, rigor, and richness of the curriculum. For example in 3/4 of Elementary schools we have dropped 79 minutes of week of science teaching under NCLB to focus on reading and math. This is actually undercutting the rigor and richness of the curriculum.

McCain – We need to tailor approaches to the school – but there is a clear bias for Direct Instruction and Phonics. So basically no departure from how NCLB has been implemented to date.

McCain – He has supported vouchers for a long time, but regards setting this policy as a state level responsibility. He is not opposed to private school funding but not advocating for it either.

Obama – Supports choice, but only in the context of access to a high quality public education.

Scientifically Based Research (SBR) – NCLB requires that materials be based on SBR.

McCain – All for it. Need to do more of it on unconventional approaches like Charter and Virtual schools. If there are problems with how it has implemented that have student innovation we need to bring academia and industry together.

Obama – SBR is too narrow a focus for R&D. Under SBR a peer reviewed study of 12 students with a control group has more validity than using statewide assessment data to see what works. If we are going to take a comprehensive approach we need many more ways of measuring success and methods that can address the complexity of the education system.

McCain – Technology can help highly qualified teachers reach more students. It isn’t about replacing teachers. We also have a disconnect between students who are learning to reach out for answers when they need them and schools that do nothing but push information at students.

Obama – We need to set a floor for access to broadband and equipment but that is not sufficient. We need to push for the development of 21st Century Skills that truly leverage the global interconnected reality of the web and which will support national competitiveness.

McCain – This is an inspirational goal but they won’t push for it.

Obama – Our native english speakers need to become bi-lingual and this effort needs to start in Elementary schools.

A student journalist from a DC middle school talked about plaster falling off the walls in their school and asked about what they would do about improving school facilities.

McCain – This is important, but it is a state level responsibility.

Obama – Good facilities are part of the floor we need to set in terms of expectations for all schools. They have a subcommittee looking to address this question but don’t have a specific policy yet.

Both campaigns are strong supporters of the reauthorization of IDEA.

The event today was co-sponsored by Ed in 08 and Transcontinental Printing. Ed in 08 “is a nonpartisan campaign supported by the Eli and Edythe Broad Foundation and the Bill & Melinda Gates Founcation” and is focused on comprensive solutions to improving education. Transcontinental Press is a Canadian company – “the friendly neighbor to the north” who share the same educational issues that we do. They are a global supplier to the book and related publishing industries. They have 60 plants in the US, Canada, and Mexico.