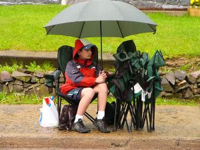 “A Cranky, Skeptical, Loudmouth looks at Social Media Marketing” is a little rain on the “Conversation Economy” parade. It was written by Bob Hoffman over at Copyblogger. The 55 comments are as good or better than the article itself (alert the Irony Police).

“You and I are web geeks. We spend way more time than we should looking at computer screens. We are not normal. Especially you. The biggest mistake any marketer can make is marketing to himself, i.e. assuming his customer is just like him. They’re not and they never will be.”

I can’t disagree with that.

“…the ability to interact with the content of the medium, not just the medium.”

Changing the channel doesn’t count. Adding a comment does.

The metrics are trickier. Using banner ads and click through ads as metrics is a red-herring. Those are old media dressed up in new clothes – kind of like running plays in TV. Of course they suck when compared to traditional media.

What would be a good metric? I would like to see an analysis of the performance of companies in traditional markets that have invested in social media compared to their peers. We’d need to look over 2-4 years since community building takes time. No, this would not be perfect, but it would be better than what has been used to date. If you know of anyone who has done this research please share it in comments.

Perhaps by biggest beef with this outlook is that it takes an absolutist perspective – I hear this all the time from clients when I advocate a social media investment. People jump to the conclusion that in order for social media to succeed all other marketing forms must fail. The reality is just the opposite – we always find a niche for new tools AND we never toss the old tools. Just because a company is investing in social media doesn’t mean they don’t need to do good old fashioned trade-shows and advertising. The relative mix will change towards what is generating the highest return and every where I’ve seen it used well social media generate a very high return indeed.

I think those of us advocating social media need to take thoughtful critiques like this one very seriously. If we can’t convince the skeptics amongst us then we have work to do. If we are going to be intellectually honest we also have to consider that they might be right. A rigorous debate is best way to sneak up on the truth.

PS – As an FYI Copyblogger is my favorite site for blogging tips and ideas.