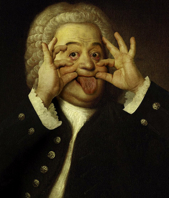 In the US we just had the most interesting election of my lifetime. What to do now that all the hullabaloo is over? Take the civics quiz to see much you remember from Social Studies and how closely you have been paying attention.

The core message – that we ignore civics at our peril – is well taken. Social Studies is one of the subjects that has taken a hit under NCLB. Publishers, to their credit, have tried to help by creating programs like QuickReads (Pearson) that teaches reading fluency through Social Studies and Science. The reading passages are aligned to grade level standards. But don’t you think it is a little odd that we have to “sneak” this in?

Elected officials did significantly worse than average citizens on this test. While this sounds horrible – well it is. 79% don’t know that the Bill of Rights expressly prohibits establishing an official state religion and only 32% can properly define the free enterprise system. If you wonder why we have an endless stream of deficits and a soaring national debt look no further than the 59% who were unable to identify business profit as “revenue minus expenses.” Sigh.

Or not. I don’t buy that somehow in the past we had this idyllic total knowledge of the public sphere and that all citizens were well informed. We have always been free to be informed and free to be ignorant. These days – with information overload hitting us from all sides – a little selective ignorance isn’t a bad thing, its a survival instinct. That said – if ignorance is bliss why aren’t more people happy?

I follow politics the way a lot of people follow sports so I’m fairly well tuned in. I was also a History/Political Science major in college. That would explain how I got 100% on the quiz. No – I didn’t peek. 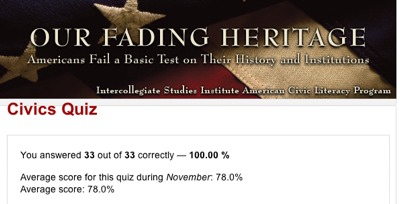 So in this week of Thanksgiving see how tuned in you are to civics and perhaps learn a thing or two. See if you can beat the 78% average for the month.

The Intercollegiate Studies Institute puts a survey out every year. Their mission is “to further in successive generations of American college youth a better understanding of the economic, political, and ethical values that sustain a free and humane society.”