The National Education Computing Conference NECC put on by ISTE in Atlanta this week was the most active education tradeshow I’ve seen since the dot com bubble burst in 2000. Ironically the 2000 show was in Atlanta, the Big Peach bookended a lull in the ed tech market that looks like it is over. 18,000+ attendees thronged the World Congress Center in Atlanta for SRO sessions and a mobbed show floor.

The International Reading Association Conference which was held just six weeks ago was sleepy backwater compared to NECC. Even with valid reasons for IRA having a slow year the difference in these shows is so dramatic that one has to conclude that educators are voting with their time and money on the best tools for teaching today.

To bring this point home look at the two pictures below. The one on the left is from NECC and the one on the right is from IRA. Both were taken at the height of show floor activity. At IRA one could have set up pins and bowled in the aisles. At NECC one had to move at herd speed to navigate the hall. 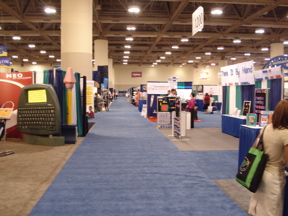 One of the surprises of the show given the level of activity was how little revolutionary new technology was on display. Ed Tech enthusiasts have been a sour lot of late – saying that they are are not hearing or seeing anything new at conferences they attend.

But perhaps a maturing set of tools and practices explains why we are seeing this burst of activity. We’ve reached the far side of the chasm. The tools are not the edgy unsupported pre-beta versions of the early 90’s that only a hard core techie could love. The solutions on display are robust, stable, and well supported with professional development and other resources.

We’ve moved from the visionary early adopters, across the chasm, and are now reaching the pragmatists in the early majority.

Hopefully this groundswell will continue to build over the coming years. If my hypothesis is correct the future of ed-tech will look like the green section of the curve below. 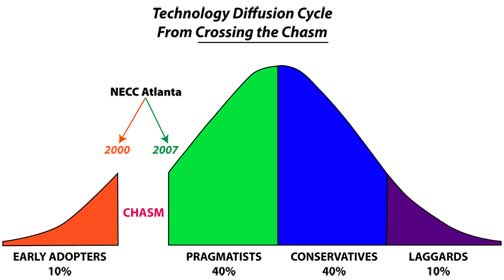 For those who need a quick refresher on Crossing the Chasm here is the Wikipedia link.