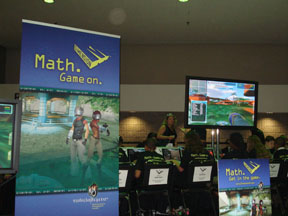 The first mutliplayer game tournament for education is being held. The event is being put on by Tabula Digita at ISTE in Atlanta (the show formerly known as NECC). A large crowd has gathered in the atrium above the exhibit floor to watch the final round.

This is a major step in the world of educational gaming. NT Etuk, the President of Tabula Digita, just said that this is really about the students. It is about meeting them where they are – kids living in a gaming world bringing the skills and abilities that go with that to their work as learners. Students have come from as far away as New York, California, and Oregon to compete today.

A new generation of educational games is reaching the market that is multiplayer, on-line, and richly three dimensional. Tabula Digita has the pole position in this emergent market and they are putting on a great show for the educators gathered to watch. The contest will pit teams of students against each other in game of using math skills to navigate and solve problems in an on-line world.

Gaming tournaments have gone mainstream as this 60 Minutes segment showed last year. While the prizes here today are not the megabucks found in commercial game tournaments the contestents will vie in three separate games for title of top educational gamer. The winner takes home an iBook laptop.

Years from now we will look back on this as an inflection point in the use of on-line virtual worlds in learning. I may have to eat my hat on this, but I believe a few short years from now events like this will surpass the Math Olympiad.