ISTE’s NECC 2008 was a success by any measure. The sibilant susurration of schmoozing and selling suffused the show space. Attendance was high (12,250), sessions were well attended (over 924), and the show floor was constantly busy. Even the San Antonio weather cooperated by being a bit cooler than usual.

If you landed on the planet on Sunday and came straight to NECC you would have no sense of the pressure on education budgets that the economic downturn is creating.

Some of this is attributable to Texas, which as an oil producing state is having a milder downturn that many parts of the country. Typically 50% of attendees at national trade shows are from within in 200 miles (double that for Texas). But that doesn’t explain all of it since according to the official numbers Texas attendees only made up 25% of the total.

Since budgets for instructional materials remain relatively static what is going on? Don’t be fooled by the calm surface waters, there is turbulence down below in the niches that make up the total. Companies that are producing standards based education technology resources and tools are booming. Textbook publishers continue to commoditize and consolidate.

The evidence is piling up that education technology does work – even if it is just at the level of engaging today’s digital natives more effectively than print. Given the costs of textbooks ($35-$75 a copy) it is getting easier to justify digital resources ($2-$10 a year). Good teachers know what works even without Scientifically Based Research (SBR) and they are voting with their interest for digital resources.

But some of the same old complaints were heard. No School Board asks the Instructional Materials folks to prove that textbooks are being used in the classroom, but they demand this all the time for education technology. It isn’t an unreasonable request – but the standard should be applied equally. If teachers are only using 50% of a textbook that is a lot of useless atoms being shipped and schlepped around. As for SBR and skepticism about technology consider this – if the textbooks were working as claimed we wouldn’t have failing schools…. 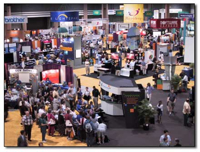 NECC remains the premiere education technology event of the year, the launch pad for the following school year, and the best place to do business with your customers and your partners.

Having said that I am increasingly skeptical that the amount of money spent on these shows is justified. Thee were at least a two companies that spent over $500,000 on this event. It showed in their presence on the floor and around town. But what could they have done with that amount of effort and cash on more plebeian but long lasting efforts like sales force training, new product innovation, or web 2.0 based marketing (which delivers new customers 365 days a year)? For half of what they spent they probably could have achieved the same result and been ahead in other parts of their business.

I’m advising my clients to dial back their investments in trade shows. To be clear – I’m not advocating abandoning trade shows – but I think they need to be relegated to a more junior position in the marketing budget given how much more effective other programs can be.

NECC 2009’s Washington DC location drew a mixed review from the vendor community. It will be useful to be in the capital in what is shaping up to be a transitional year for educational policy. On the other hand DC is one of the most expensive places to do business in the country with hotel rooms even at third tier chains going for $250/night. It will also be the height of tourist season – plan for busy and expensive flights as well.

Yesterday in my impressions of NECC piece I made a couple of errors.

There were computer vendors on the floor including Dell, Gateway, and RM. While Apple was not exhibiting they were engaged behind the scenes in sponsoring events and providing equipment for registration and other activities (although it was amusing to see IBM monitors hooked to Macs in the reg area). But the overall computer vendor presence was subdued. Even Microsoft had a relatively small space.

I underestimated the number of people Promethean sent – it was over 100. Times are good in whiteboard land. With Nettrekker and Atomic Learning they threw a hell of a party for their customers last night (thanks!).