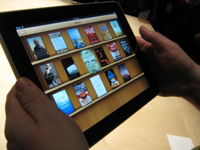 An iPad has been floating around the PCI office for the past week (thanks to Randy Pennington‘s ed-tech jones). Will it be a game changer for education? Can it redefine how we deliver instructional content?

I’ve tried to refrain from commenting on the iPad until I could see and multi-touch it. Having worked at Apple for 7 years (back in the Pleistocene era) I’m wary of 1.0 releases.

It appears that my skepticism was misplaced in this case. My iPad 3G is now on order (yay!).

Here are a few impressions I’ve already formed. I’ll continue to comment as my personal use matures.

The iPad size and interface make it the perfect content reader.

I’ve had an iPhone (which I love) for a couple of years. Reading web pages – even those designed for the iPhone – is an eye strainer for those us of a certain age. But for web browsing the iPhone was a huge improvement over the Blackberries I used for years. It was great – until I saw the iPad. Now it feels cramped. Sigh.

I used the phrase “content reader” with purpose. Unlike Kindle and other eReaders the iPad does a whole lot more than text – and in gorgeous color. Movies, animations, games and simulations, and music look and sound spectacular.

I refrained from jumping on the Kindle primarily because about 80% of my current reading is web sites and email. It does neither of those well. Besides, I’ve never been particularly impressed by recreating the book experience on technology – it just isn’t a very imaginative use of the tech. It reminds me of putting plays on TV.

That said – books look beautiful on the iPad. Just don’t plan on reading them in direct sunlight.

For education I can easily see the iPad (or something like it) displacing physical textbooks. Because illustrations can be animated (don’t try it on the Kindle) and because external web links work flawlessly, the iPad stands alone today as a platform for education content publishing. At 1.2 pounds it slips in a backpack and it sits unobtrusively on a desk.

Stir in a full blown education management system with innovative content and you have a winner. Blackboard has a nice demo of their iPad application in the video below. I can see students and professors at the University level flocking to this experience.

Power to Last All Day

Power has been an achilles heel of several generations of mobile education devices. Because the iPad will run on a charge for a day or two it clears one of the quiet barriers to wide spread technology adoption in the classroom. Teachers and students need to know that the tech will be there whenever they need it if they are going to integrate into daily usage.

Want proof? Look at whiteboards. Until schools started installing them in every classroom teachers could never count on having access to the tech at the teachable moment. As a result they were not widely used. Long lasting power for mobile devices changes the game in the same way.

I saw an ad from Apple last night that this battery technology is in their next generation of MacBook laptops. I’m sure other providers will follow suit shortly. So this advance won’t be limited to the iPad.

I don’t think we are going to see the next great novel written on the iPad. But short bursts of tech like blog posts, notes, and and 1-2 page papers should be just fine. The lack of tactile response on the screen based keyboard makes speedy typing problematic. With an outboard keyboard it gets a lot easier, but then you have another piece of crap to haul around, semi-defeating the purpose.

Other media actually do better with multi-touch. Managing, cropping, and resizing photos with your finders – a snap. Editing video and audio by dragging things around – very cool.

I’m looking forward to heading out the on the road with nothing but the iPad. I can stay on top of email, write blog posts, and upload photos with ease (about 99% of what I do out of the office).

There are also presentation solutions – connect to a projector or whiteboard and take it away. There will doubtless be wireless solutions for this as well which will be really nice.

Except for specialized applications the current price is too high for widespread educational adoption. Full fledged laptops are in the same range. The low end version is $499. The top of the line is $825. Throw in AppleCare and a couple of extras (case, adapters, etc.) and you are in the $700-$1000 range.

I expect Apple will drive down the cost curve as fast as they can – even producing education specific versions to create a market in the $200-$300 range. At that point it gets easier to justify replacing textbooks with the reader.

It is too early to really tell who is going to take Apple on in this space. My guess is that people won’t stand by for 6-8 months the way they did after the iPhone was released. Expect this to be more of a dogfight. My guess is that Google’s Andriod platform and one other provider will emerge as the competitors.

This Mashable roundup has a good rundown on the likely candidates. I’m not sure that in the touch tablet form factor a scaled down Windows 7 will be better than a scaled up iPhone/Andriod OS, but time will tell.

I do believe that the iPhone App platform is a huge leg up for Apple out of the gate regardless of who their competition ends up being. Just look at the thousands of education titles and lectures that already exist.

What’s A Textbook Publisher To Do?

For now this is an R&D platform not a distribution channel. I couldn’t even bring myself to charge mine on the company card – I took it as a personal expense. But I want to use it, live it, and see how it can change my own workflow. With that experience in hand I hope to have a sounder vision of how the technology can be used in the classroom. It will definitely take off in the trade and home education markets first – schools will follow not lead.

Over the next year we will scatter some around the organization and let people play with it. We’ll try some simple projects to learn the toolset, and then we’ll get into the serious business of crafting solutions for students with special needs. The multi-touch interface holds huge potential for the population we serve.

We already discovered that Dragon Dictation on the iPad (signficantly better than the iPhone app) can support one of our employees who is deaf in small meetings. It allows more natural and spontaneous two way communication than having to use a sign translator. We speak and it goes to text, she types and we can read it.

The iPad feels in my bones like a game changer – in fact the last time I was this excited about a technology purchase was in 1985 when I purchased a 128k Macintosh. It is so intuitive and easy that a 2 and half year old can figure it out in a matter of seconds. Watch the video below. When she finds the spelling lesson she says “It has games!”