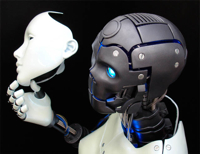 From a school’s perspective the rules for when and how to intervene in off-campus cyberbullying are unclear.

Further complicating matters is that the students themselves are developmentally at an age when they are experimenting with social interactions and often unaware of the consequences of their actions. The real goal should be educational, not punitive, so that as they mature they learn to manage these tools well.

Hello, babies. Welcome to Earth. It’s hot in the summer and cold in the winter. It’s round and wet and crowded. At the outside, babies, you’ve got about a hundred years here. There’s only one rule that I know of, babies—God damn it, you’ve got to be kind.

When I interviewed teachers for the Best Practices in Implementing Video Games & Simulations in the Classroom white paper a couple of years ago they all told us that they had not experienced any bullying problems with software provided by the school. Most of the time the bullying takes place after hours and on equipment and networks that the school doesn’t own.

So for publishers the good news is that if you build a system that schools will deploy this isn’t likely to be a major issue. You should be ready to address it with research and a solid suite of administrative tools.

If you are encouraging kids to use external social networks and resources you may have think twice about how you introduce them and whether it would be possible to do on school sponsored sites like Nettrekker.