Texas has been a vocal holdout on adopting Common Core State Standards (CCSS) since the beginning.  Last week all 14 publishers who submitted high school biology textbooks for adoption in TX ignored the state’s demand to include creationism.  I believe these two news items are directly related and reflect a huge shift in the market dynamics for instructional materials in the United States.

Partisans think the creationism kerfuffle is because the publishers are taking a principled stand for scientific accuracy or, conversely, because they are elitist liberals.  In some cases these may have been factors in publishers’ decisions.  That said, I think it is much simpler and can be explained by following the money.  For the publishers this was a business decision, not a political stand.
This is the clearest example to date of how CCSS is going to reshape who gets to dictate the overall  structure and content of instructional materials.  The hypothesis I floated in 2010 – that the combined market power of smaller states could steal the march on the big 3 (TX, CA, FL) – appears to be  happening.
CCSS is influencing every decision publishers make about prioritizing investments in new products.  The fact that this is a biology textbook, while CCSS only covers RLA and Math, only reinforces my point.  RLA and Math account for roughly 70% of overall materials purchases so publishers won’t take any risks that jeopardize their position in those subject areas with the center of power in the market.
A couple of charts make this point more clearly than words can.
This first chart shows the market pre-CCSS.  There were 50 individual markets and the states that had formal adoption processes had almost all the power to dictate what got written and when.  When big states committed to purchasing large amounts of a single subject area in a specific year it made sense for publishers to hit those dates with fresh product.
This chart shows the top 10 adoption states, and you can see that even within this group California and Texas dominated (click to enlarge).  CA, TX, and FL* all represented the biggest buckets and lowest hanging fruit for sales.  Everyone else got warmed over, slightly tweaked versions of materials created for the big 3. 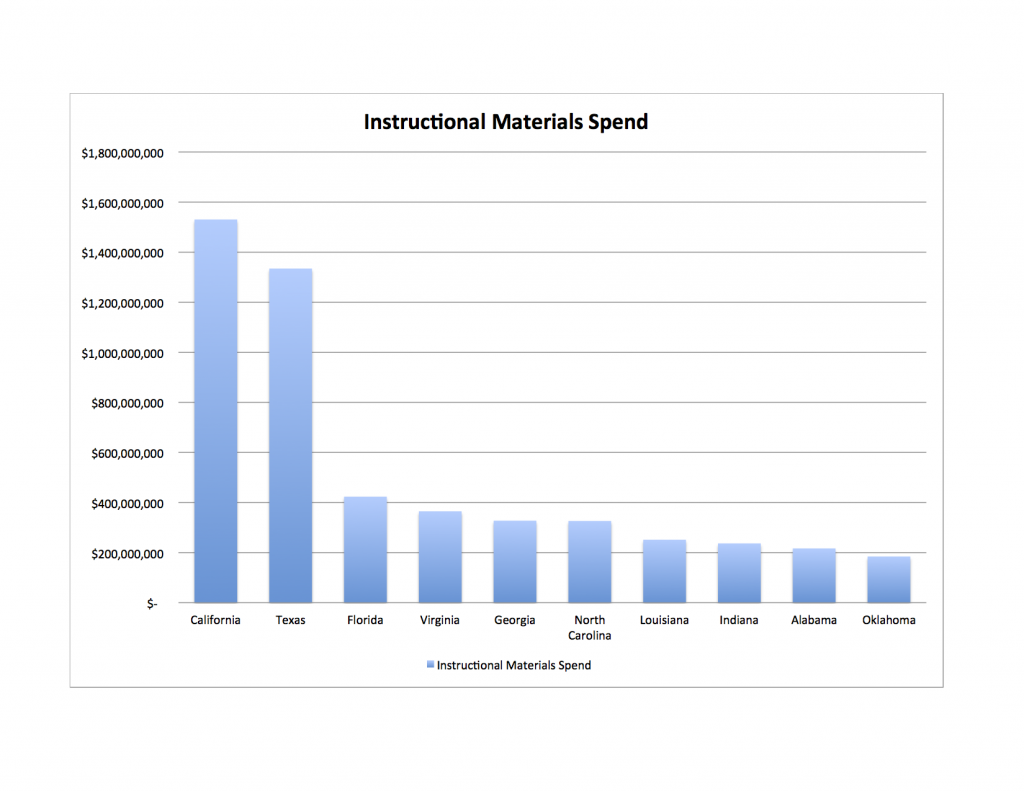 This second chart shows the new market structure with all the CCSS states, Texas, and the other 3 holdouts (AK, NE, VA).  I don’t think the shift could be any clearer.  Instead of worrying about offending the panjandrums in TX publishers now have a very different equation.  Note the shift in the scale on the Y Axis in particular. 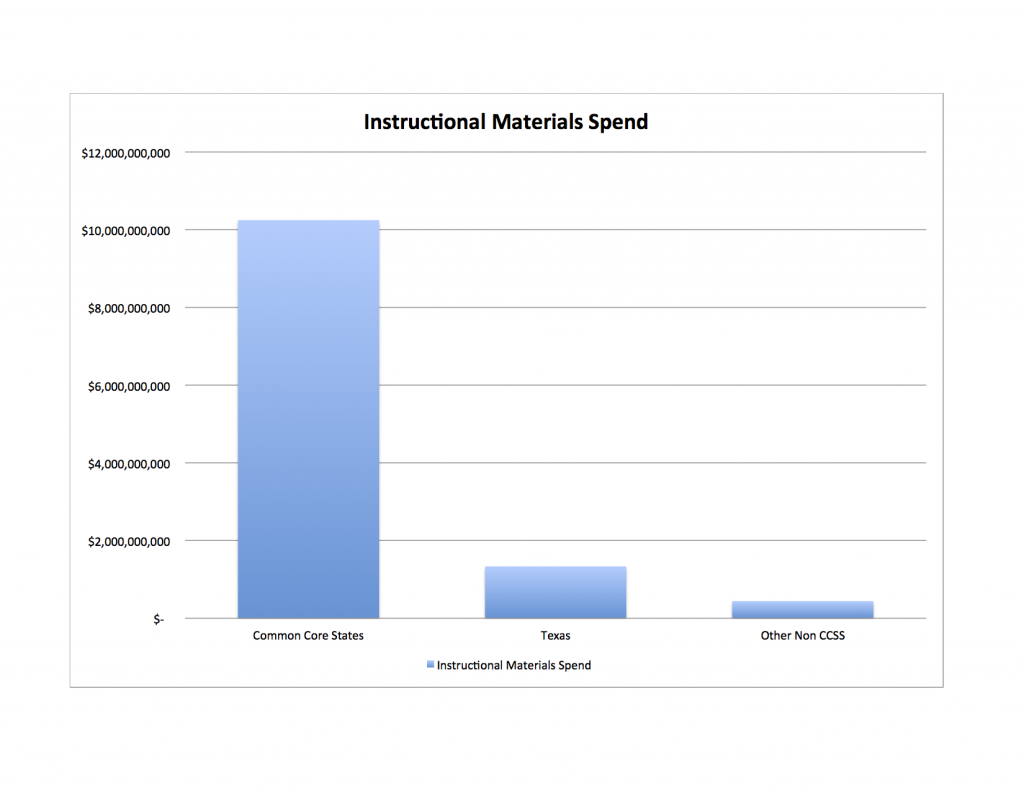 This is what publishers see today when they evaluate how to prioritize development decisions.
Somebody in California clearly got the memo because they are actively investing in taking the lead within the CCSS states.  The recently released budget includes $1.2 billion in one time funds for implementation of CCSS in 2014-2015 to cover training, materials, and other preparedness.  This will get publishers undivided attention and will be the engine that pulls the CCSS train.
Texas will not become irrelevant, but it will lose its power over publishers that allowed its instructional decisions to reverberate nationally.  The internal politics of the state are not conducive to adopting CCSS so I don’t anticipate this trend will change over the next several years.
The state has every right to make this decision and they appear to be willing to live with the consequences to maintain their individualism.  It remains a large market – $1.3 billion annually in instructional materials – they also spend slightly more than the average state on materials – $274/student in TX vs. $261/student nationally.  For those reasons it won’t fade away completely.
But if I were employed at one of the large outposts education publishers have built in Austin, San Antonio, and Dallas I’d be looking over my shoulder as the bigs consolidate offices into New York, Boston, and Chicago.  Or I’d research real estate in Sacramento.
—————
*Florida has also been a powerhouse despite being smaller than CA and TX largely because it is organized along just a few very large county wide districts.
Contact Us
info@headwaystrategies.com
About