Web 2.0 is providing another nudge to the conversation economy. As advertising becomes less relevant the power of engaging your customers in a real dialog increases. Listening should be a core competency at the corporate level. 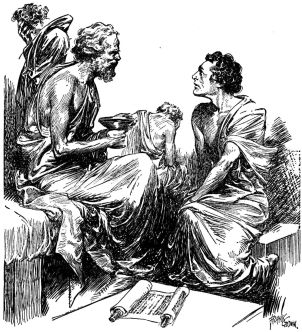 A productive conversation is Socratic, it focuses more on good questions than on staking out positions, and both parties have to be open to learning something. It is a relatively quiet affair, based on mutual respect. It helps the participants distinguish between facts and opinions and arrive a reasoned judgment.

But most marketers are having trouble letting go of dictating a message to the market. We have been taught that the louder we shout and more often we shout the more likely we are to get results. But what happens when everyone is shouting as loud as they can? White noise.

A brilliant article and a subversive video got me thinking along these lines recently. David Armano makes the case for the conversation economy in this article. At the same time the Bring the Love Back video is a hilarious take on the consumer breaking up with advertising.

In a nutshell consumers/buyers want to be heard. If you are still talking at your customers instead of with them you are missing a great opportunity to earn new business.

Follow for a taxonomy of the kinds of questions marketers can ask to get the conversation going….

Much of my thinking on this subject was shaped by a great monograph called Socratic Questioning and Role Playing produced by the the Foundation for Critical Thinking. I’ve been recommending it for years to Sales Reps who wanted to sharpen their listening skills. Recently I’ve begun to think of it as it applies to the entire scope of a business.

One of the common misconceptions about the Socratic Method is that you can use it to lead someone exactly where you want them to go. It is really about mutual discovery of the truth through conversation. The role of the expert is asking good questions with the goal of engaging in a give and take that will reveal the truth.

If the destination is known in advance then it isn’t Socratic. To see this in action tune into any of the Sunday shout shows about politics. You may be entertained but you won’t learn much. As a contrast – Charlie Rose is Socratic.

Here is a taxonomy of questions you can use to engage with the market. These can be used to moderate on-line forums, on sales calls, at focus groups, on trade show floors, and even in advertising.. In all cases the twin goals are helping the customer think more deeply about their problems and educating the company on the customer’s point of view.

1. Questions of clarification. What do you mean by? Could you give me an example? Why did you say that?

2. Questions that probe assumptions. Is it always the case? What are you assuming? Your point depends on the idea that ____, is this correct?

3. Questions that probe reasons, evidence, causes. Is there good evidence for believing that? Is there a reason to doubt the evidence? What do you think the cause is? What would convince you otherwise?

4. Questions about viewpoints or perspectives. How might others interpret the data? Are there other ways to see this? How would you respond to the objection that ____?

5. Questions that probe implications and consequences. If that happened what else would happen as a result? What effect would that have? Is that a realistic expectation? When you say ____, are you implying _____?

It isn’t complicated or tricky, it just requires a genuine openness to pursue the questions to their logical ends.

Success in this context is helping the customer distinguish between facts and opinions in the interest of reaching a reasoned judgment on what to do about purchasing your product. One needn’t argue about facts – you just need to find the best way to determine what they are. Opinions are expressions of personal preference.

“But most of the important issues we face in our lives are not exclusively matters of fact or preference. Many require a new element: that we reason our way to conclusions while we take the reasoned perspectives of others into account.” CCT

None of this precludes traditional product positioning. What I am arguing for is that the positioning should be built around an on-going conversation with your customers, not on an idea cooked up on a conference room. If you hit the mark you can whisper and still be heard over the din from those who are stuck in the old model.