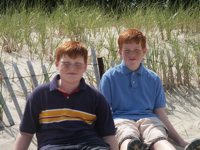 What do you do with 112 degrees of dry Texas heat on a Sunday afternoon? We sheltered in the Alamo Drafthouse for the Harry Potter matinee and brunch.

Our 17 year old son Peter was sitting between Leslie and I, his broad shoulders connecting us as a family. The cartoons had run, the infamous “no talking” video had played (nsfw), french toast was cooling, the lights dimmed.

As the Warner Brother’s logo emerged on screen I began to cry. This final movie, at the start of Peter’s final year of High School, was a moment that caught me completely off guard.

It was the realization that the childhood of both our boys had been wrapped neatly by J.K. Rowling’s books and movies. Peter is a young man and will only be living with us for a few more months. Our children literally came of age to this iconic coming of age literature. There are millions like us.

I remember reading the first books to our boys when they were still wearing footed jammies. 7 was the magic age at our house when Harry was introduced. When I was home we’d settle in on the couch in front of the fire. When I was traveling I used first generation video chat to read to them from afar. They’d be snuggled up in one of their beds with a laptop before them and I’d be in some bleak Westin. The distance didn’t matter, magic happened as the words flowed.

A couple of months after the first movie came out Leslie was walking into the supermarket with our two redheads. A five year old girl stared in awe and whispered to her mother that the Weasley brothers were there. Some days of mischief proved the wisdom of her words.

Having friends at Scholastic made me a hero – we were guaranteed copies of the books as soon as they were available. Thank you Jean.

Our sons were roughly the same age as the main characters as the series unfolded. The personal struggles of Harry, Ron, and Hermione bumbling through puberty were the same ones our boys encountered. Not the dark magic part though, thank goodness.*

The Potter series created opportunities to discuss the role of good and evil, the nature of friendship, the power of learning, and human sources of danger in the real world. The fantasy context made these conversations safer, but there were valuable lessons embedded throughout. Only one other series rivaled Harry for the depth and complexity of the issues presented – Lord of the Rings.

These stories will resonate for future generations; the long tail of cultural influence is just beginning. But there will never again be a generation that grows up alongside the unfolding saga, first in print and then in the movies.

It was the languorous unwinding of the story over years that was part of the magic. Too often in our “everything, all the time” culture when something captures our fancy we swallow it in one large gulp.

With Potter you had to wait, you had to remember, you had to savor. Just as we have with the story of our own boys growing into men. It was that echo that gobsmacked me.

The good news is that unlike stories with tidy endings life just goes on. Our children transition into young adults, their adventure continues to unfold (but the stakes get higher). I hope that the lessons from the books and our discussions come in handy.

The art of storytelling is not a natural act for education media companies, but as we move to transmedia it becomes essential to holding an audience. The craft of narrative has a long and healthy future ahead of it in education, but we need to be recruiting for this outside of our normal orbit today.

Thank you Ms. Rowling – your story was a lovely frame for the childhood of our sons.

* Spoiler alert – I’m pretty certain that had Bellatrix LeStrange ever come between Leslie and the boys that she would dispatch Bellatrix with the same gleeful ferocity as Mrs. Weasley.